This past weekend The Pas Huskies hosted the Wescana Peewee Tournament.  Eleven teams attended coming from as far away as Dauphin and Norway House.  Two teams competed from The Pas in the AA and A divisions.   (Read more...) 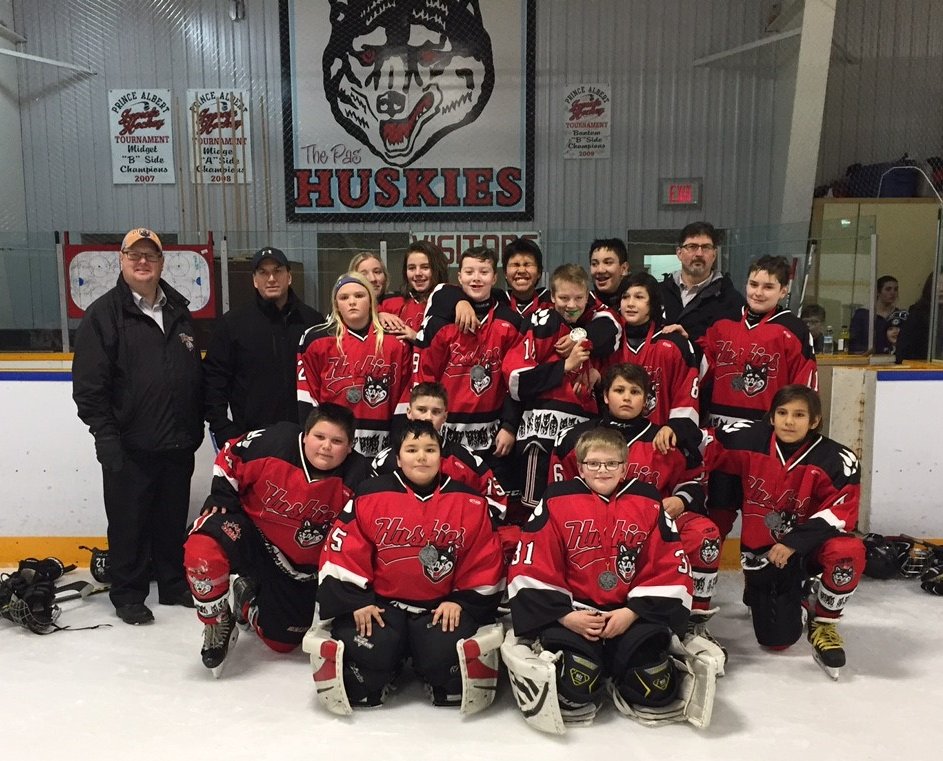 Friday saw action from both teams with The Pas Huskies A team playing two games.  The first game for the Huskies A team resulted in a 5-3 come from behind win over OCN, with Lukas Nabess netting the hat trick! The Huskies trailed 3-2 until the 6:39 mark of the third when they would score three unanswered for the win!

The Huskies AA team then played The Dauphin Kings in what turned out to be a back and forth game as the Huskies would hold a 3-1 lead until Dauphin scored at the 12:22 mark of the third period.  Dauphin would score again a short time later to tie the game up at 3.  The Huskies responded with 3:58 remaining in the third to regain the one goal lead and would then spend the last 2:39 of the game shorthanded, including a short 5 on three.  The Huskies would hold off Dauphin for the 4-3 victory!  Hutton Hurst-Foster (2G/1A) and Colby Hnidy (3A) had three points each while Ashton Paul and Cheechoo Lathlin each had a goal and an assist in the victory.

The Huskies A would play a second game of the afternoon against the Flin Flon Bombers A.  The Huskies team was unable to match Flin Flon and dropped a 12-2 decision.  Lukas Nabess again lead the way with a goal and an assist, and Xander Wadelius nabbing the second goal.

Saturday would again see The Pas Huskies A team begin action, this time against Norway House A.  The Huskies would fall behind 3-0 in the first.  The would pull within 1 in the second but two more second period goals by Norway House would put the game out of reach.  The Pas would score once more to close to 5-2 but that would be all that they could muster finishing the game 7-2.  Lukas Nabess would net his 5th of the tournament and Andrew Fisher would score The Pas' second goal.

The Huskies AA team would meet up with the Flin Flon Bombers AA in their first matchup of the day.  The Huskies would score first and take a 1-0 lead into the second, where they would score 2 more for a 3-0 lead going into the third.  Flin Flon would score early in the third to close to 3-1 before the Huskies would score three straight for a commanding 6-1 lead at the end of the second.  Late in the third, Flin Flon would get three straight in a four minute period to close within two goals at 6-4 before The Pas would score with 1:33 remaining to seal the game.  Final score 7-4 for the Huskies, Ashton Paul leading the way with three points (2G/1A), Cheechoo Lathlin and Lazarus Constant each with a goal and an assist and Abby McKinnon with two assists.  Connor Colgan, Colby Hnidy and Hutton Hurst-Foster rounded out the scoring with a goal apiece.

The Huskies A second game of the day was against Thompson King Miners A.  The King Miners would score first holding a 1-0 lead into the second.  The Huskies would score midway through the second to even the score at one but fall behind 3-1 at the end of the period.  The Huskies would pull within one but eventually fall 8-3 after 5 third period King Minor goals.  Huskies goaltender Rylan Cote did his best to keep the Huskies close facing 49 shots in the loss.  Naima Constant, Andrew Fisher and Jaelyn Michelle scored for the Huskies with Lucas Nabess assisting on all three!

The Huskies AA second game on Saturday was an exciting matchup against a very comparable Swan River Stampeders A team.  The Huskies would jump out to a 2-0 lead in the first period and carry it into the second.  The Stampeders would charge back and score three unanswered to take a 3-2 lead into the break.  The score would remain the same until the Huskies would tie it up at 16:03 remaining in the third.  A minute later they would then take the lead for the last time 4-3, which would hold up as the game final.  Ashton Paul led the way with three points (2G/1A).  Cheechoo Lathlin had a goal and an assist and Connor Colgan rounded out the scoring with 1 Goal.  Jackson Prokopow faced 28 shots on net many of which were “grade a” scoring chances, allowing 3 goals against.

Sunday finals had the Huskies A team playing in a qualifying game again against OCN.  Both teams worked hard and were not able to score in the first.  The second period had Lucas Nabess score to take a 1-0 lead into the third period.  The Huskies team, suffering from a short bench due to many injuries could not maintain the pace of the game and OCN scored 3 straight in under a minute and one more a couple of minutes after that to take a 4-1 lead over the huskies midway through the third.  Each team would score once more to make the final 5-2 for OCN.

The Huskies AA team having gone through the round robin undefeated found themselves in the gold medal game against an also undefeated Thompson King Miners team.  The Pas would take the lead midway through the first period on a blast from Cheechoo Lathlin that had the King Miners goalie frozen.  Thompson would score three quick goals in the last three minutes of the period to take a 3-1 lead into the second.  Thompson would score three more in the second to end the period up 6-1.  The King Miners would score three more in the third before the Huskies would score for the final time finishing the game in a 9-2 defeat, claiming Silver for the tournament.  Cheechoo Lathlin and Ashton Paul each had a goal and an assist and Connor Colgan had one assist in the effort.

A big thank you goes out to the Wescana Inn for again sponsoring our tournament, all the volunteers that made it so successful, as well as all the players and families that took part.